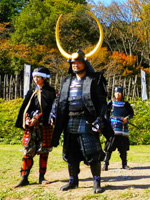 Welcome to Nagoya. Nagoya is the center of the Chubu (literally means ‘central’) Region of Japan. Nagoya has a good access to mountains and seas, local culture and historical sites in this region. There are also many very interesting festivals and museums. Chubu Region is also famous for the concentration of various industries. You can visit the latest high-tech factories as well as traditional sake breweries.

Unlike Kyoto, Nara and Tokyo, this region is not well known to international tourists and may not be chosen as a destination during their visits to Japan.

Our team of guides are all local people who are very proud to be here. They propose to take you to not only places that you can find in guide books but also places not known to even most of Japanese people. That is the advantage of local guides.

Most of tours presented on this website are proposed as the day trips or half-day trips from Nagoya. However, these are just some model courses so you can choose where you visit or do not visit. You can add some other destinations. Overnight stay may be available upon request. Please do not hesitate to contact us.

We also prepare itineraries for some popular destinations with estimated price.

Please also visit our blog, Nagoya Tours, Experience the Difference, and Facebook Page. Our guides regularly post articles on the blog, including seasonal specialties, festivals, events and recommended destinations. Questions and requests are welcomed on the Facebook Page.

To touring companies looking for guides

We can help you to choose destinations for your clients and guide them in and around Nagoya. Please see this page for detail.