We are offering guided private tour service to Meiji Mura from Nagoya. If you are interested in the Meiji Mura tour, please contact us. 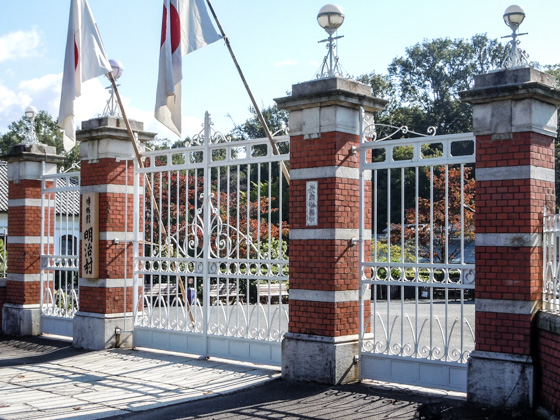 Meiji-mura is one of Japan's best outdoor museums exhibiting various cultural assets of the Meiji period, including the ten important cultural assets.

Meiji period, which started in 1868, is the time when Japan ended its seclusion policy, Sakoku, and started adopting European and American cultures and institutions to build a foundation of a modern country. Architecture of Meiji period is based on the traditional wooden structure technology, while it also reflects Western techniques and materials.

Steam locomotive (SL), Kyoto city tram, and the village bus are convenient to travel within the Meiji-mura.

A lot of buildings constructed during the Meiji period disappeared due to earthquakes, World War II, and the post-war development projects accompanied by the country's rapid economic growth. Historically and artistically valuable architecture of those days was brought to the museum for conservation. Many of the buildings which were transferred are Japan's important cultural assets.

The Museum Meiji-mura is very big, therefore it is divided into five different areas starting from 1 cho-me up to 5 cho-me.

A merchant house which used to stand in the center of Nagoya.

This house was built for a Prime Minister during the Meiji period to relax and do fishing after retirement. Each room is equipped with an emergency bell and there is even a small emergency exit in the bathroom. These were made to protect the VIP.

A Saké brewery with a Japanese style tile-roofing. The brewing method and tools used for making Saké are displayed.

The building was designed by Frank Lloyd Wright, the great American architect of the 20th century, and was completed in 1923 after a four-year construction period. It is often used as a shooting place for dramas and TV ads. The center of the main lobby has a three-story hall. There is a coffee shop on the 2nd floor to relax and enjoy the ambience. (Closed on weekdays between December 1 and end of February [excluding the New Year's Holiday].)

A vast nature that surrounds the museum

A lot of beautiful nature remains inside the premises of Meiji-mura. Having a picnic on the lawn would surely be fun. Iruka-ike lake which is in a nearby distance can also be observed. The lake which is 16 kilometer around is an artificial storage reservoir for agricultural use. Quite big for a reservoir.

A western style restaurant which serves rice-omelet and curry and rice, one of the popular menus (From 900 yen each). Special seasonal menus related to the great figures of the Meiji period are also offered. (English menu available)

The store deals with small Japanese goods, accessories, and ceramic products. The Tenugui towels, small-sized Furoshiki cloth and handkerchiefs (500 yen to 1,000 yen per piece) are available in different designs and colors. The Arimatsu Shibori tie-dyeing products, traditional art craft of Nagoya are also popular. (If you like to visit Arimatsu, see this page.)

At the Haikara Isho-kan (costume house) in the 2 cho-me district, you can try on the Yagasuri and other Hakama costumes, and take pictures (800 yen). Rental costumes are only for 5 minutes.